Play Age of the Gods: Prince of Olympus Slot Game

Hercules takes on Hydra, the nine-headed beast in the Age of the Gods: Prince of Olympus online slot game

As one has come to expect from the Age of the Gods franchise, the Prince of Olympus is an excellent game complete with free respins, free games, and a progressive jackpot. You’ll see wild, bonus, and scatter symbols on the board, all helping to create multiple chances at winning on every spin.

Read on for a complete review of this Herculean casino game. 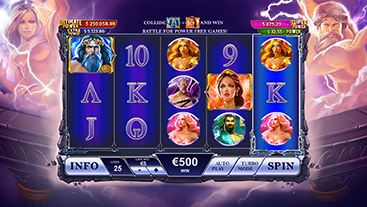 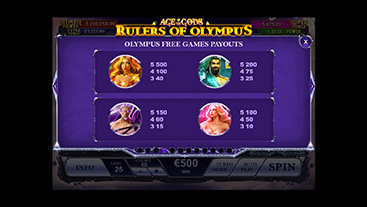 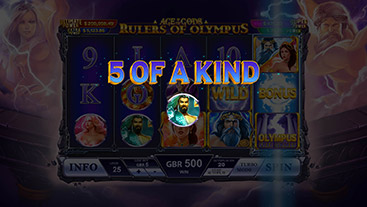 Age of the Gods: Prince of Olympus has an adjustable 25 paylines and the option to bet up to £10 per line. The top paying regular symbol is 4,000 coins when you get 5 Cerberus symbols in a row.

As part of the Age of the Gods franchise, there are four progressive jackpots that can be randomly triggered on any spin; Power, Extra Power, Super Power, and Ultimate Power.

Once you’re in the progressive jackpot round, you will have a 4x5 grid of golden coins. Click on the coins until you find three matching symbols, and you’ll win the jackpot that is associated with that symbol.

The high-value symbols are all related to the story of the Greek God Hercules, he makes an appearance as a wild symbol, but more about that in a minute.

The highest valued regular symbol is the three-headed dog Cerberus, with a max payout of 4,000 coins. Three golden apples follow that with a payout of up to 500 coins and Hercules strengthening belt and spiked club being valued at 200 coins when you get five in a row.

There are three bonus symbols in this slot game:

Age of the Gods: Prince of Olympus is a Playtech game that can be played on both mobile and PC/Mac devices. The gameplay is similar, as are the payouts, jackpots, and bonus features across all devices.

Age of the Gods: Prince of Olympus can be played in both landscape and portrait modes. The only real difference is the location of the spin and betting option button, but in both cases, the Playtech team did a great job in making sure the buttons aren’t too small. When playing on mobile, you’ll have the option to either swipe the reels with your finger or click on the spin button to begin the game.

To win any real money, or have a shot at winning any of the four progressive jackpots you will need to open an account and make a deposit through any of the payment methods that are accepted at Casino.com UK. Once the money has been deposited in your account, you will receive an instant access to all the online casino games.

Age of the Gods: Prince of Olympus is very enjoyable to play, the symbols have subtle animations when you win, and the soundtrack added to the excitement levels. The Herculean Strength feature can trigger several times as can the Free Games features, which can result in some excellent payouts.