Get lost in the dazzling, sparkling jewels when you spin the reels in one of the most popular NetEnt online slot games, Starburst. There is more than just bright colours and fun music to this game, with several bonuses and great payouts, you’ll have a lot of chances to win real money.

There are 7 symbols on the reels. The BAR is the top paying symbol with a max payout of 250x followed by a lucky 7 that can pay out as much as 120 times the line bet when you get 5 in a row. There are five jewels that brighten up the board and the payouts can range from 5 to 60x depending on the colour and number of matching jewels you’ll have on the payline. 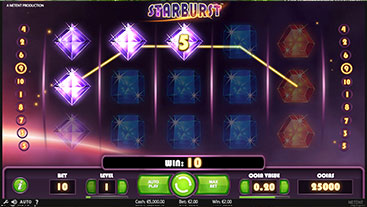 How to Play Starburst Online Slot at Casino.com

You can play Starburst for fun in the Casino.com Practice Mode and get a feel for the game. When you’re ready to play for real money you’ll need to open an account at our online casino and make a deposit using any of our convenient payment method options. Enjoy a Welcome Bonus of up to $400 after making your first deposit.

Starburst features an adjustable 10 paylines and a betting range from $0.01 to $100.00. In order to bet the max you’ll not only need to select the 1.00 coin and activate all 10 lines, you’ll also need to adjust the Bet Level to 10. There is an auto play option which will allow up to 1000 spins without touching the spin button. You can adjust the settings to make sure that the spins will stop if your cash goes above or below a set number.

Once you’re happy with your wager, click on the spin button and watch with anticipation as the symbols spin around the reels. One of the great features in Starburst is you can win going in both directions. While most online slot games only pay out on wins going from left to right, with Starburst you’ll enjoy greater odds of winning, since you can also win if the symbols match up going right to left.

In addition to the regular symbols on the reels, there is also a Starburst Wild that adds an exciting feature to the casino game. When one starburst wild lands on any of the middle three reels, it will expand to cover the entire column. Then it will trigger a sticky respin, all the other reels will spin and the wild will remain in place. You can have up to 3 respins on a single spin.

The iGaming industry moves at a tremendous pace, with new technologies allowing for faster, better-looking, and more advanced slot games. Despite this, and the fact that Starburst is a few years old, it still looks incredible and it’s that longevity that has made this game such a big hit with so many players.

If you have yet to play it for yourself, then you don’t know what you’re missing. But fear not, as you can find it right here at Casino.com and you’re just a few clicks away from playing it yourself and seeing what all the fuss is about.

Join Casino.com today to gain access to fantastic slot games like Starburst and to uncover many more titles like it. With one spin, you’ll understand why the world has gone Starburst crazy!