Rocky Balboa was a small time fighter without much promise to ever go anywhere big when, out of the blue, opportunity knocked. It’s a good thing he answered because it was the greatest challenge of his life, and it’s what gave him the ticket to bigger, better things. Well now you have the same chance to fight your way to the top and really make it big time with the Rocky online slots machine at Online Casino India! You can fight off all of the usual competition, and face some really impressive foes for the championship title you have always dreamed of. Gloves on, and keep it clean!

Rocky is a 25-payline option that is designed to look and feel like you are sitting right outside the ring, watching an exciting match. The reels are populated with some familiar faces for the movie fans in the audience. Strings of letters including an R, O, C, K and Y will show up often, along with a close up of the Italian Stallion and some boxing gloves to match. 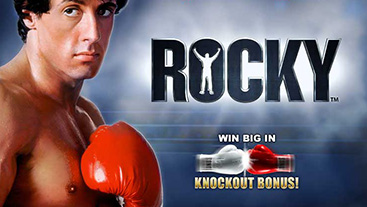 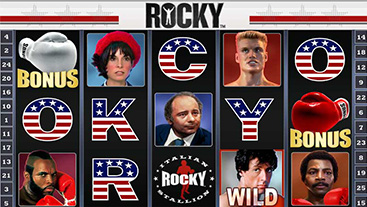 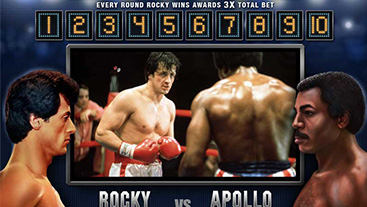 The scatter symbol is an amazing benefit to your online casino game. Just two of these symbols already makes it worth playing because you will get to multiply your total bet by the value of the scatter set and keep the cash. Three or more of these icons, and you are looking at multiple free games as well. Three symbols award 15, four symbols gives 20 and five symbols 25! The coolest part of all, though, is that anything you win in the free rounds will be doubled automatically. You can always win more freebies during these rounds too!

A neat little extra feature is the Rocky name game. As you saw from the pay chart, the different letters that make up this star’s name will appear on the reels. If you spell out Rocky from left to right on the reels, your total bet for that round will be multiplied by five and added to your bankroll! It’s a small feature, but it packs a good punch.

Bonus Round For Rocky Slots Machine

The bonus round for this game is called the Knockout Bonus, and you’ll need the white glove on reel one and the red glove on reel five to coordinate in order to open this round. Now is the exciting part; you get to fight against the ultimate opponent face to face in the ring! Choose between Clubber Lang, Ivan Drago and Apollo Creed as your opponent and then let those fists fly. You get ten rounds to try to beat your foe, and each one is played to the background of a short movie clip that you are going to love. Every time you win a round, your earnings will increase, starting with triple the original total bet.