Raising the Steaks: Casinos Where the Chips Come With a Michelin Star

Blog > Casino News > Raising the Steaks: Casinos Where the Chips Come With a Michelin Star 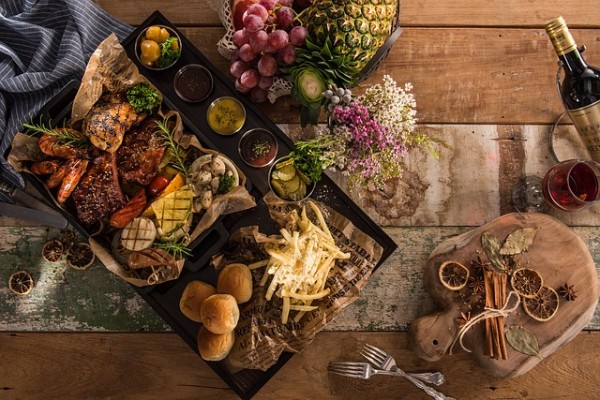 Legend has it that the all-you-can-eat-buffet was the invention of quick-thinking publicist Herb McDonald. Herb was working at the El Rancho Las Vegas resort in the mid-1940s. One evening, a handful of hungry players came to the bar looking for food. The restaurant was closed but Herb headed to the pantry and grabbed some cold cuts, cheese, bread, and other goodies.

The late night buffet was a hit with the punters and Herb saw an opportunity. The one-dollar all-you-can-eat buffet was born and it would be a Las Vegas staple for years to come; keeping players at the tables and drawing new business to the hotel.

Times change. Today’s casinos fight tooth and nail for every customer and catering is one of the weapons available. In Macau, the hub of gambling in Asia, every casino operator worth his Himalayan rock salt has a clutch of Michelin-starred restaurants. Las Vegas is also serving up the haute cuisine in a bid to keep its more demanding punters wanting more. Here’s our list of the top dining destinations where the casino chips come triple cooked.

Iberico pork barbequed over lychee wood, stunning dim sum, and deep-fried Fine de Claire oysters, are just a few of the highlights on offer at the Michelin starred Jade Dragon restaurant. Situated in the heart of the City of Dreams resort in Macao, the Jade Dragon is one of several high-end restaurants in the Melco Resorts & Entertainment portfolio.

The Jade Dragon is the only restaurant in Macao to hold three Michelin stars and has eleven private dining rooms, connected directly to the car park via secret lifts for those discrete VIP dinners. There are five different areas in the restaurant, each with its own colour scheme, as well as lavish helpings of gold, jade, embroidery, and exquisite Chinese art. This is dining at its very finest.

Ducasse Doubles Down: Morpheus and Rivea

Alain Ducasse is the Colonel Sanders of fine dining. The French chef has 31 restaurants worldwide and a staggering 20 Michelin stars. Two of those stars are courtesy of Morpheus, which is also situated in the Melco–owned City of Dreams. Diners can enjoy classic French cuisine, with dishes like Bresse hen chicken with crayfish and steamed duck foie gras.

“The French chef has 31 restaurants worldwide and a staggering 20 Michelin stars.”

In Las Vegas, monsieur Ducasse is behind one of Sin City’s most revered restaurants: Rivea at the Delano. Located on the 64th floor, the restaurant has outdoor seating with spectacular views of the Strip. The food is contemporary Italian/French with a heft of decadence.

Head to Singapore and the iconic Marina Bay Sands hotel and – underneath – not only will you find 15,000 sq/m of gaming space but also a luxurious shopping centre and a selection of restaurants. For the red meat lover, Cut by Wolfgang Puck serves up one Michelin-starred steaks from all kinds of cows, including Wagyu, Angus, and USDA Prime. It’s a carnivore’s delight.

Raising the game by another star is Waku Ghin by Tetsuya Wakuda. When the munchies kick in at the craps table, or hunger pangs are having a negative impact on your blackjack game, just head for the lift and make a beeline for this incredible (and very pricey) restaurant where Oscietra caviar sits alongside marinated Botan shrimp and sea urchin. This is Japanese cuisine at its finest. Wakuda was the first person ever to be appointed as a sake ambassador of Japan from outside the country.

Although Joel Robuchon died in 2018, his legacy lives on. Famed for holding more Michelin stars than any other chef (32), Robuchon’s Las Vegas restaurant is considered one of the best in the world. The three-Michelin star tasting menu dining experience will cost more than $1,000 for two. For that, you get to enjoy classic French cuisine and dishes like sea urchin flan and truffled langoustines with foie gras.

Hungry for more? Fine dining and gambling can also be found in London, Monaco, Venice, Germany, and many more countries around the world but – in 2019 – the winner is Macao. The booming Asian economy is where the culinary action is; more often than not bolted onto a luxurious resort where gambling is also on the menu. Grab that table and tuck in.