A Short History of Las Vegas: The Evolution of Sin City 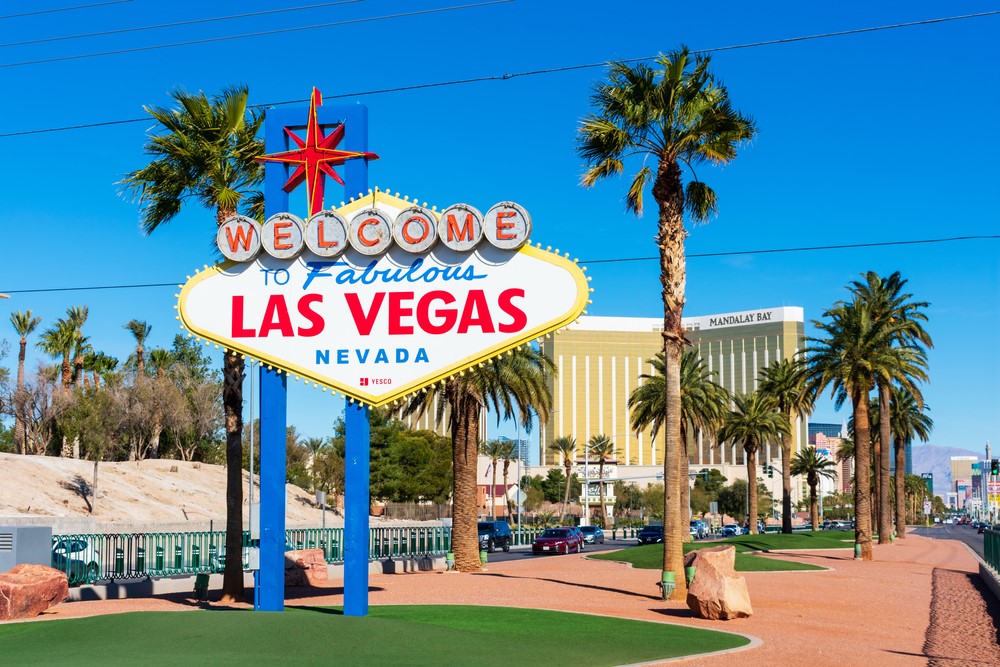 Few cities capture the imagination like Las Vegas. If a city was a celebrity, it would be a mix of Marilyn Monroe, Lady Gaga, and Gary Busey: beautiful, larger than life, and slightly insane. Las Vegas is a black hole of earthly delights, abandon, and pleasure; a gravitational singularity of sin.

After all: what happens in Vegas, stays in Vegas.

The first inhabitants of Las Vegas arrived more than 10,000 years ago. Tools, carvings, pictographs, and evidence of early Native American life have all been found in the area, in the North-East of the Mojave Desert. The Paiute tribe spent its winters in the valley, migrating from the nearby mountains.

Las Vegas got its name from the Santa Fe trader Antonio Armijo, who was trying to find a new route from Santa Fe to Los Angeles. In 1829, a 60-man party explored the area and discovered the Las Vegas Springs. This perfect re-supply spot shortened the trail and the traders named the valley “the meadows” – in Spanish: Las Vegas.

Until 1844, Las Vegas was Mexican territory. A fort was built in the valley but never permanently inhabited. In 1855, Mormons briefly settled the area but stayed for only three years. The first permanent settler was prospector Octavius Gass who renovated the abandoned fort; turning it into a ranch and way station for weary travellers.

In 1902, the railroad arrived. Now, with a reliable source of fresh water, transport, and accommodation for travellers and prospectors, the seeds of modern Las Vegas were sown. The Mormons would make it their home and one of the world’s most ambitious civil engineering projects would put Las Vegas on the map.

Las Vegas was officially founded as a city on May 15th, 1905 when railroad owner William Andrews Clark auctioned off 110 acres of land which would become the downtown area.

The term ‘Sin City’ dates all the way back to 1906, and originally referred to an area of Vegas called Block 16. This area was allowed to legally sell hard liquor and was frequented by ‘ladies of the night’ and their customers. Over time, the whole city of Las Vegas would become known as ‘Sin City’.

The Golden Gate Casino claims to have been the first casino in Las Vegas, as the land it is built on was purchased in 1905. This establishment also lays claim to the city’s very first telephone, as theirs was installed all the way back in 1907.

In 1911, the city of Las Vegas was fully incorporated into Clark County: by which time it was a small settlement of about 1,000 people. The population would double again by 1920. Work began on the Hoover Dam in 1931 and thousands of workers headed to Fremont Street, in search of showgirls, casinos, and somewhere to kick back after a hard day at the rock face.

In 1941, the western-style El Rancho Vegas hotel and casino opened. Costing a cool $500,000, the hotel had a mock Spanish style frontage, a cowboy-themed interior, a swimming pool, and the largest dining room in town. In the casino, punters could enjoy action at two blackjack tables, one roulette, table, one craps table, and 70 slot machines.

The El Rancho and other casinos built along Highway 91 would become known as the Las Vegas Strip.

From the early 1940s to the late 1960s, Las Vegas would undergo its most dramatic transformation; from small town travellers’ rest stop to the entertainment and gambling capital of the world. The mob already had form in Cuba and knew how to run a tight casino. Las Vegas was open for business and business was coming…

By the mid-1950s, mobsters from New York, Chicago, Cleveland, Detroit and St Louis were running some of Sin City’s most popular casinos, including the Tropicana, The Sands, Circus Circus, the Dunes, the Desert Inn and the Riviera. The casinos were cash businesses, allowing the mafia to skim money and avoid the taxman.

So popular was this new ‘Disneyland for adults’ that, by 1955, more than 8 million people were visiting every year, generating casino revenues in excess of $200 million. In 1956, a 21-year-old Elvis performed his first shows at the New Frontier Hotel.

On Thanksgiving Day in 1966, a certain Texan billionaire called Howard Hughes moved into the penthouse suite at the Desert Inn Casino. He stayed there for four years. In the late 1960s, Howard Hughes went on a $300 million spending spree; buying several Las Vegas hotels and casinos.

The Nevada Gaming Commission was desperate to remove mafia influence and corruption from Las Vegas. It welcomed the arrival of Mr Hughes and big business. Hughes was perceived as a ‘legitimate’ businessman by the Nevada Gaming Control Board.

It was the start of new era. The corporations were moving in; bringing spectacle, scale, ambition, and the possibility of a family holiday in Las Vegas.

In 1973, the MGM Grand Hotel and Casino opened. It was the world’s largest resort; every one of its 2,100 rooms a ‘petit suite’ with a gold star on the door. By 1975, gaming revenues had cracked the $1 billion mark. The population of Las Vegas was doubling every year. The city would evolve to become the largest of its kind founded in the 20th century.

In 1989, Steve Wynn opened the Mirage. It was the first new Vegas hotel in more than a decade and heralded the beginning of the megaresort era. In the next decade, the Rio, Excalibur, Luxor, Stratosphere Tower, New York-New York, the Bellagio, Mandalay Bay, and the Venetian would all join the ranks of a newly reinvigorated Las Vegas.

Modern Las Vegas is a triumph of ambition over reason. Six of the world’s largest hotels are located here. It would take you 288 years to stay in every hotel room in town and it’s the brightest place on planet earth.

These days Las Vegas is mass tourist destination. The glamour remains but it is harder to find and more expensive. Sin is still on the menu but sits alongside shopping malls, theme parks, and family shows. Gambling is still the city’s raison d’être but it’s easy to spend a fortnight in town without betting a cent. The famous Vegas Strip now runs for about 4.2 miles (6.8km) along a section of the Las Vegas Boulevard and incorporates around 30 casinos, not including the many other venues nearby which bring the total number of casinos in Sin City up to around 60.

In a land that celebrates free enterprise, the Vegas megaresorts are a testament to both competition and capitalism; a masterclass in architectural machismo, with each new development more insanely over-the-top than its predecessor. Gondolas, pyramids, dancing fountains, and roller coasters built on top of a 277 metre tower. It’s all real. You’re not in Kansas, Dorothy. It’s just Las Vegas.