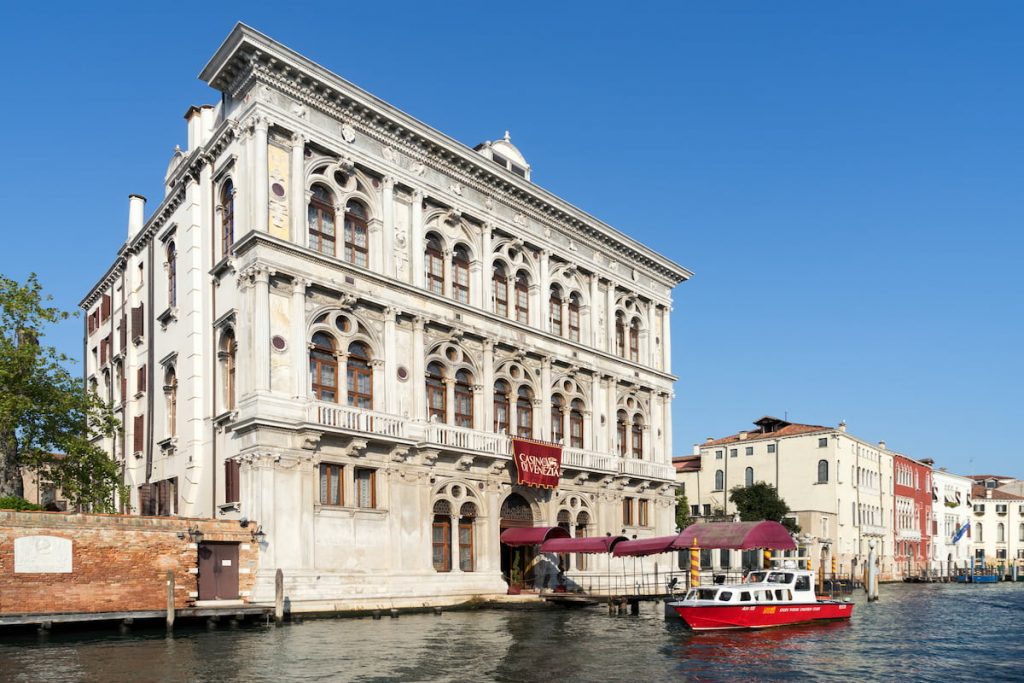 When it comes to images of casinos, the glitz and glamour of the Las Vegas strip are usually the first that spring to mind. Yet some casinos are extremely old, dating far beyond the great Nevada metropolis and the resorts of Asia. Some of them are woven into the fabric of their country’s history, and one of those is the Casino di Venezia, the oldest casino in the world.

Gambling in one form or another has been around since the dawn of civilisation. From the Romans to Elizabethan England, most societies have had some form of favourite game or sport to place wagers on. However, the first official gambling house, commonly identified as a Casino, originated in Venice, Italy.

The Casino di Venezia opened in 1638. It started life as a theatre, which had a wing reserved for gambling during the intervals. However, in 1946, it would switch locations to the Ca’ Vendramin Calergi.

This was a palace, constructed in the 15th century, for the royal family. It fit perfectly with the beautiful architecture of the city, as it was designed by Mauro Codussi who had also created many religious buildings in the area. Adorned with frescoes and paintings by the Italian masters of the day, many of these can still be seen in the building today.

As a home for Italian royalty, it had many famous guests. One of its most well-known was Richard Wagner, who would often frequent the palace as a vacation getaway. He was given hospitality there by the owners in 1882 where he set to work on his score for Parsifal until his death. Today, a Wagner museum remains in the rooms he frequented, which includes documents, letters, and unique items the musician used.

The casino is truly unique due to its location. It has water access, with a jetty that lets gondolas drop you off right outside the door. Its restaurant is dedicated to Wagner, and inside you can find a huge range of table games and slot machines. The casino frequently hosts tournaments for professionals, such as the World Series of Poker.

Closely following this is the Kurhaus Casino in the Baden Baden region of Germany. It was once described by Marlene Dietrich as the most “beautiful casino in the world”, and with its stunning belle epoch ornamentation, it would be hard to disagree.

It rose to popularity in the 1830s, as gambling was banned in France. Many people then took a trip over the border for their entertainment, and the casino became a haven for the famous and wealthy at the time. During 1972 and 1933, however, it fell on hard times and closed for a period. It remains the go-to destination for those with lots of money to play.

Arguably the most famous old casino in Europe is the Casino de Monte Carlo. The back story is as equally impressive as its architecture.

In 1854, the House of Grimaldi, which owned the principality of Monaco, was in financial trouble. They set about with a plan to build a spa and casino hotel. This would attract people to the area and hopefully bring them a handsome revenue.

However, it was not to be. A lack of access to Monaco and poor marketing meant very few visitors attended the facility. It would not be until 1859 that the casino would begin to turn a profit. It is still the primary source of income for the Grimaldi family and Monaco itself.

The casino itself is also famous for several reasons. The first women’s Olympiad took place in its gardens during the twenties. It also has a long history with film and television, having appeared in three James bond movies, the heist movie Ocean’s Twelve, and even several animated features.