The Mob Moves in and Sinatra Sets Up Shop. Las Vegas: Gangsters and Glamour (Part #2) 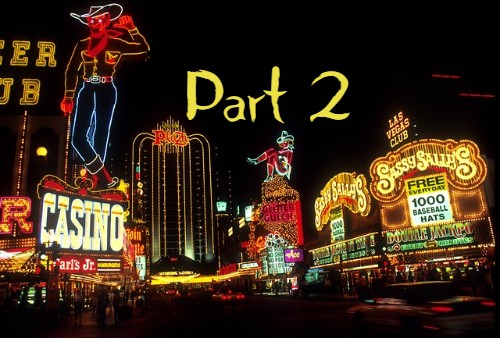 In the three-part history of Las Vegas, chapter two is the main course: a sumptuous serving of glitz and glamour with a side order of sin, a generous portion of organised crime, and an appetising glimpse of the future – courtesy of the city’s first resident eccentric billionaire.

From the early 1940s to the late 1960s, Las Vegas would undergo its most dramatic transformation; from small town travellers’ rest stop to the entertainment and gambling capital of the world. The mob already had form in Cuba and knew how to run a tight casino. Las Vegas was open for business and business was coming…

Meyer Lansky and Benjamin ‘Bugsy’ Siegel met each other when they were children in Brooklyn. They became lifelong friends and formed the Bugs and Meyer Mob and Murder, Inc. – specialists in bootlegging, with a fearsome reputation for violence. By 1936, Lansky had moved into gambling with operations in Florida, New Orleans, and Cuba. Las Vegas was next.

The El Rancho resort was the first major hotel in Las Vegas and it was a success, leading to the development of several more hotels nearby. The new hotels were all owned by local Las Vegas families, very protective and fully aware of the desire from outsiders to get onto the Vegas real estate ladder. The mob had never invested in property but – persuaded by Meyer Lansky – they cleverly channelled funds through Mormon-owned banks to gain a foothold. Getting the ball rolling with the iconic Flamingo Hotel and Casino.

The Flamingo was special. Costing more than $6 million, it was the definition of luxury: 105 rooms targeting high rollers and the Hollywood A-list. Lansky persuaded his mafia investors to let his friend Bugsy Siegel run the Flamingo. The hotel’s opening night, in 1946, was a flop due to bad weather, despite a guest list that included George Raft and Jimmy Durante. In the first week, the hotel lost a bruising $300,000.

Accused of skimming money from the building costs, Siegel was shot dead in 1947. Despite this, his vision for Las Vegas prospered, with the mob opening more and more casinos on the strip that offered visitors the ‘complete experience’: great entertainment, high quality catering, and enough gambling to satisfy any appetite.

Throughout the 1950s and 1960s, the careers of both Frank Sinatra and Las Vegas were intertwined. The ‘Chairman of the Board’ had the style, swagger, and sophistication that the reinvented Las Vegas wanted to project. Sinatra was the acknowledged leader of the Rat Pack; a group of showbiz heavyweights that included Sammy Davis Jr, Dean Martin, Tony Curtis, Shirley MacLaine, and more.

By the mid-1950s, mobsters from New York, Chicago, Cleveland, Detroit and St Louis were running some of Sin City’s most popular casinos, including the Tropicana, The Sands, Circus Circus, the Dunes, the Desert Inn and the Riviera. The casinos were cash businesses, allowing the mafia to skim money and avoid the taxman.

So popular was this new ‘Disneyland for adults’ that, by 1955, more than 8 million people were visiting every year, generating casino revenues in excess of $200 million. In 1956, a 21-year-old Elvis performed his first shows at the New Frontier Hotel, billed as “America’s only atomic powered singer”.

On Thanksgiving Day in 1966, a certain Texan billionaire called Howard Hughes moved into the penthouse suite at the Desert Inn Casino. He stayed there for four years eventually deciding to buy the property and nearly every other hotel in his line of sight.

Hughes was perceived as a ‘legitimate’ businessman by the Nevada Gaming Control Board. The Board was happy to see the mafia’s influence decline. It was the start of new era. The corporations were moving in; bringing spectacle, scale, ambition, and the possibility of a family holiday in Las Vegas.

These days Las Vegas is mass tourist destination. The glamour remains but harder to find and more expensive. Sin is still on the menu but sits alongside shopping malls, theme parks, and family shows. Gambling is still the city’s raison d’être but it’s easy to spend a fortnight in town without betting a cent.