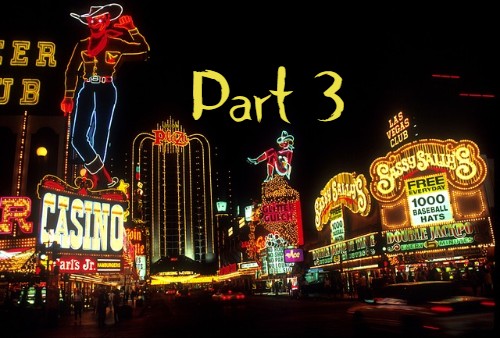 Modern Las Vegas is a triumph of ambition over reason. Six of the world’s largest hotels are located here. It would take you 288 years to stay in every hotel room in town and it’s the brightest place on planet earth.

Every year, more than 42 million people visit the city in search of good times and all-you-can-eat action. Gambling is still the backbone of business, generating nearly $8 billion in revenue every year; but non-gaming activities are on the increase.

In the late 1960s, Howard Hughes went on a $300 million spending spree; buying several Las Vegas hotels and casinos. The Nevada Gaming Commission was desperate to remove mafia influence and corruption from Las Vegas. It welcomed the arrival of Mr Hughes and big business.

The corporations played ball. In 1973, the MGM Grand Hotel and Casino opened. It was the world’s largest resort; every one of its 2,100 rooms a ‘petit suite’ with a gold star on the door. By 1975, gaming revenues had cracked the $1 billion mark. The population of Las Vegas was doubling every year. The city would evolve to become the largest of its kind founded in the 20th century.

In 1989, Steve Wynn opened the Mirage. It was the first new Vegas hotel in more than a decade and heralded the beginning of the megaresort era. The Polynesian-themed hotel came with a 50-foot volcano that erupted every 15 minutes, as well as a quarter-mile-long swimming pool, four white tigers, 6,400 employees, 1,000 palm trees, and more than 3,000 gold-tinted hotel rooms.

The Mirage was pure opulence and spearheaded the vanguard for some of the strip’s most amazing resorts. In the next decade, the Rio, Excalibur, Luxor, Stratosphere Tower, New York-New York, the Bellagio, Mandalay Bay, and the Venetian would all join the ranks of a newly reinvigorated Las Vegas.

In a land that celebrates free enterprise, the Vegas megaresorts are a testament to both competition and capitalism; a masterclass in architectural machismo, with each new development more insanely over-the-top than its predecessor. Gondolas, pyramids, dancing fountains, and roller coasters built on top of a 277 metre tower. It’s all real. You’re not in Kansas, Dorothy. It’s just Las Vegas.

Take for example: the Luxor. Now, more than 25 years old, this Vegas OAP still houses an atrium large enough to hold nine 747s stacked on top of each other, as well as the brightest spotlight in the world. At the Venetian, you can hop on board a real gondola and enjoy views of a note perfect copy of the Rialto Bridge. If dancing fountains are your thing, the Bellagio delivers with more than 1,200 to enjoy. For a fee of just £2,000, you can even choose the music.

Las Vegas is like a butterfly that endlessly reincarnates; reinventing itself for every generation. Nothing is forever in Sin City. Even the gambling is not invincible, as Vegas seeks to rebrand itself as a family destination. In recent years, tourist numbers have slumped but business is booming – once again – in 2019.

In 2020, the much vaunted Circa Resort is scheduled to open on Fremont Street. The building will take up an entire city block and is the first all-new downtown hotel in four decades. The Delano, Linq and SLS are all new to the city and prospering. Every one has a twist in the tale, a must-see feature, or a bucket-list pool. These days, offering simple good value accommodation just doesn’t cut the mustard.

As long as there is blackjack, roulette, craps, poker, and people looking to party, Las Vegas will prevail. Ever-evolving, never dull, and with a global reputation, as Elvis said: Viva Las Vegas.