Sic Bo is a dice game of ancient Chinese origin – ‘Sic Bo’ translates as ‘Precious Dice’ – which was brought to the United States at the beginning of the 20th century by Chinese immigrants. Over the years Sic Bo has become a staple at most online and land-based casinos, along with that other popular dice game Craps.

However, a lot of people are still not familiar with the rules of this casino game, so in this article we are going to explain the rules of Sic Bo in a clear and straightforward way, so that you can enjoy this dice game next time you visit the casino.

The basic gameplay of Sic Bo is extremely simple. Put simply, players bet upon the outcome of three dice rolled by the dealer. A board shows various different betting option, and a bet is placed by placing your betting token on the relevant segment(s) of the board.

Let’s take a look at the different betting options available when you play Sic Bo online.

When you place your bet on ‘Big’, you are hoping that the total of the three dice will total between and 11 and 17 points (note that rolling three sixes will not result in a win when placing this bet.

Placing a bet on ‘Small’ is a bet that the total of the three dice will be from 4 to 10. Again, rolling a triple one does not win the Small bet. 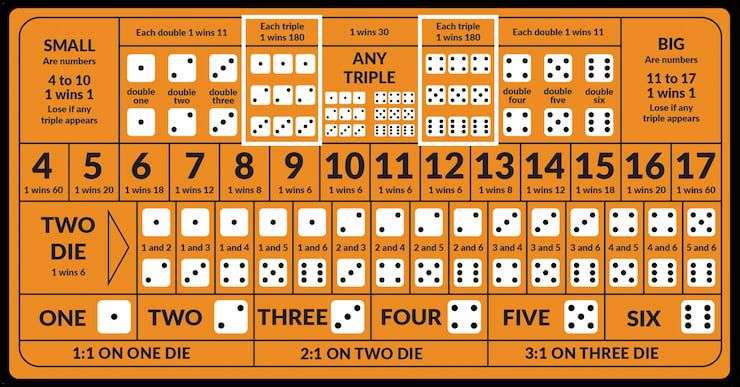 A Specific Triple (or ‘Alls’) bet is one which the player wagers that a specific number will appear on all three dice rolled, for example, three sixes. 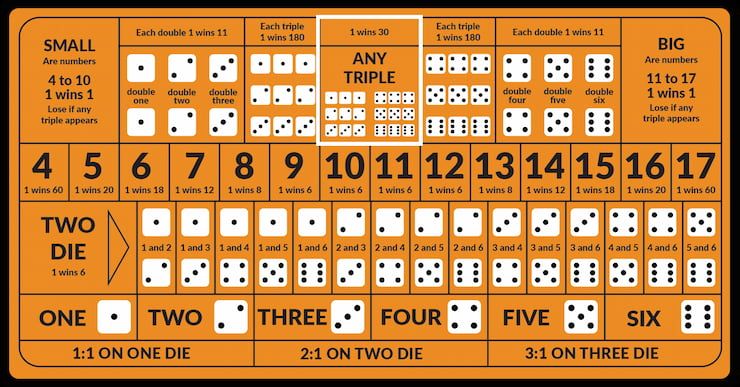 ‘Any Triples’ is a bet that any triple will be rolled, from three ones through to three sixes 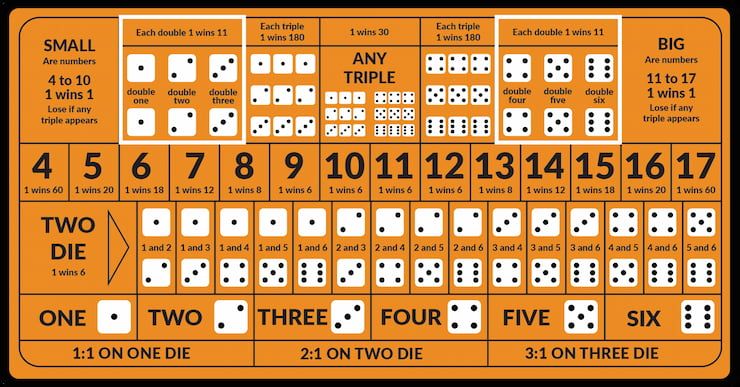 Betting ‘Specific Doubles’ when playing Sic Bo is a bet that at least two of the dice rolled will show a particular number. 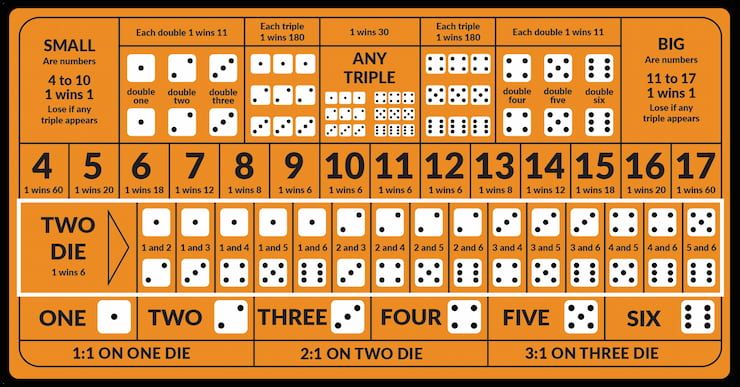 You can also bet on a ‘Dice Combination’, which is a bet that two chosen (different) numbers will appear when the dice are rolled, for example a two and a six.

One of the most popular Sic Bo bets is the ‘Three Dice Total’ wager, where the player tries to guess the exact total of the three dice. Statistically speaking some totals are much more likely to appear than others, as we will show in the table below, and the house edge ranges from 9.7% to 15.3% depending on which number you choose.

Here are some additional Sic Bo bets which are not available on all tables, but which you may find on selected Sic Bo games. Note that the following bets are not generally offered when playing Sic Bo online.

Odd and Even Bets

A bet on ‘Odd’ means that the player is hoping the total of the three dice will be an odd number. Note that if the three dice roll the same number (eg three fives) it is NOT counted as a winning ‘Odd’ bet.

Betting on ‘Even’ is a bet that the total score of the dice will be an even number, again with triples excluded.

The player chooses any three numbers and wins if all three selected numbers appear when the dice are rolled.

The player selects a specific double (eg two 4s) and another specific number (eg 5), and wins if both come up. In this example, a player would win if the rolled dice finished on 4, 4, 5.

As a dice game, there are no tips or tricks that will enable you to influence the roll of those three dice. This game is not skill-based and relies entirely upon luck when it comes to determining the outcome of a game. As a player, the only real influence you can have over the game is when it comes to choosing your bets.

One option to choose would be to go with the bets which have the highest probability of success. As you can see from the tables above, your best chance of regularly claiming a win is thus by betting on Big, Small, Odd or Even, with their 48.61% success rate.

However, since the player is taking on the house at Sic Bo, let’s take a look at those bets with the lowest house edge. The house edge is the amount that statistically the casino will win if enough games are played (although bear in mind this could require millions of hands to be played out). The remainder is the ‘return to player’ and as a general rule, the higher the RTP the better the potential outcome for the casino player over the long term.

As you can see, the probability of success means that betting on Big/Small or Odd/Even gives the player the best chance of a win, but there are low house edges on a number of other single dice and combination bets. There are never any guarantees of success when playing a game of luck such as Sic Bo, but knowing the house edge and probabilities for each bet type will help you to make an informed decision when placing your next bet.

Can I play Sic Bo at Casino.com?

What does ‘Sic Bo’ mean?

Sic Bo can be translated as ‘Precious Dice’.

What is the best strategy to win at Sic Bo?

Sic Bo is a game of chance, so there are no specific strategies that can be used to guarantee success. The player cannot influence the outcome of the game, but chances of success vary according to the bet type which is selected.

Is there a live dealer version of Sic Bo?

Yes, Casino.com offers two versions of Sic Bo which can be streamed live to your phone, tablet or desktop device.

What is the house edge for Sic Bo?

The house edge varies according to which bet type is selected. The Sic Bo house edge ranges from 2.78% to 29.2% (using standard UK Sic Bo rules).

At Casino.com we offer live Sic Bo tables where you can experience authentic casino action, place your bets and watch a real croupier throw those dice via live stream to your computer, tablet or phone.

Whichever bet you choose to make at the online Sic Bo table, the most important thing is to set a budget of funds you can afford to lose and to never exceed this amount. Online casino gambling is an entertaining pastime and should never be considered as a way to make money or regular source of income. Should you feel that you have an issue with gambling, please contact a group such as @begambleaware in strictest confidence.

*Odds, Probability of Success and House Edge are based on standard UK Sic Bo table.