How to Play 3 Card Brag 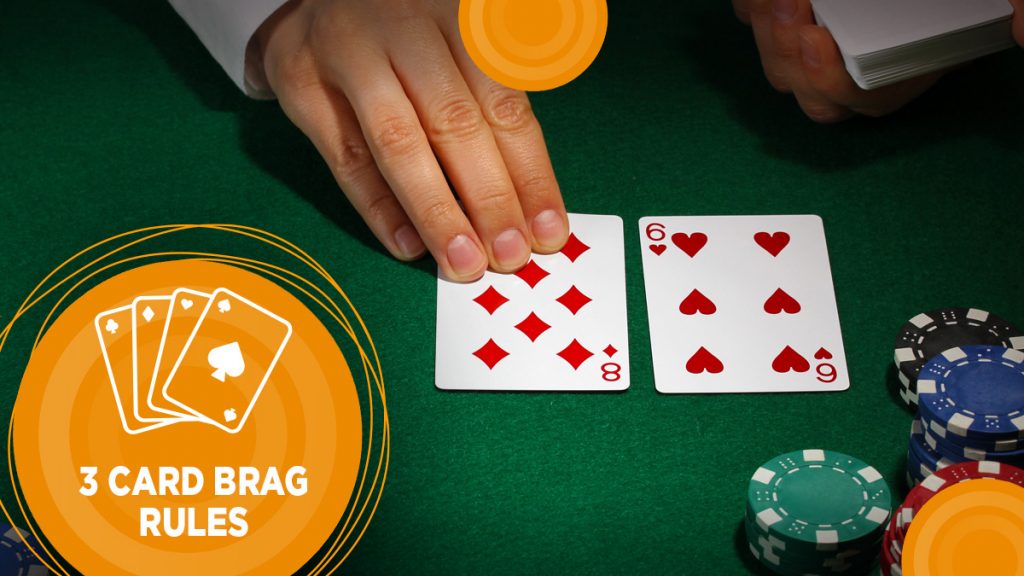 Brag or bragg is one of the most storied card games in the world and may, in fact, be the oldest poker variant played in casinos today. Created in 1721, the same decade Edmond Halley was working as Astronomer Royal over in England, and the employee suggestion box was invented in Japan, the modern version of brag is actually a variant of the historical game.

Brag, as it’s most commonly known, is a game about bluffing and betting that is very similar to 3 card poker. The only major difference between these two casino experiences is in the hand rankings and the potential Return to Player values, which we’ll cover a bit later on. All you need to know for now is that 3 card brag is an easy-to-learn game that has grown in popularity since developer Playtech created an online version, allowing it to be played on mobile phones.

Let’s go over the mechanics of the game first.

It takes just a few minutes to learn how to play brag at its most basic level. Compare that to the full-size game of poker, which ties professional players in knots for the entirety of their playing career. For home games, you’ll start by deciding on how many people you want to play with. This is usually between 3 and 8. However, live casino games are usually contested between (one) player and the dealer over a single round.

So, to begin, the player must make an entry bet, known as the ante, before they can receive any cards. The size of this wager is outlined by the dealer or the game’s paytable. Then, the croupier and the players are all dealt three cards, face-down. After this, the players make a decision of whether they want to play or fold, based on the quality of the hand they are holding.

The hand rankings for 3 card brag are as follows, with the strongest possible hand added in brackets –

Confused? If you have any experience with 3 card poker, the above hand ranking won’t make much sense, as several of the hands (in bold) have different names in that particular poker variant. In online poker, it’s not absolutely necessary to learn the value of each of these hands, as either the dealer or the computer will know which cards are the strongest. Keep this guide handy for home games.

Just to reinforce the point made above, the strongest Prial and, therefore, the strongest hand of all is three threes and not three aces, as the card values may suggest. In games with more than one player, you can also win almost immediately by being the only person who doesn’t fold at the beginning of the game. Of course, you can lose straightaway by folding your own hand, too.

With all cards on the table, the game can begin. You’ll be pleased to know that the interaction between card values and card hands is by far the most complicated part of 3 card brag, and the game is now just a cycle of betting and folding. The length of each 3 card brag game is determined by the variant, with between one and three rounds of betting taking place before a winner is declared.

As mentioned earlier, in the 3 card brag game played in casinos, only one betting round is played. To help you understand all this information in a more straightforward manner, let’s summarise a standard 3 card brag game:

That’s basically it for 3 card brag’s rules. One final note on gameplay is that, if the dealer doesn’t have a queen-high hand (or better), they do not qualify to play. In this scenario, the player’s ante and play bets are returned at 1:1 and the game ends. In a similar vein, it’s recommended that the player folds if they also do not have a Q, 6, 4, or better hand.

Types of Side Bets

Casino players love to over-complicate things, largely because it gives them more opportunities to bet on their favourite games. While only the ante and play bets are necessary to get through a single round of 3 card brag, there are two side bets that provide an extra element to the gameplay during standard games. These are the pair plus and poker plus wagers. The poker plus bet can only be placed once the ante is paid.

These are both very simple bets but the payouts and the possible hands need some explaining. We’ll come to that in the next section. For now, here’s a brief introduction to both of these side bets.

Unfortunately, both of these wagers come with a low chance of succeeding, so they’re not recommended for games with a high ante. A better option is the bet below:

Inevitably, as a casino game, 3 card brag is bound by the house edge. In this case, it’s around 2.01%. This figure is dependent on at least a basic understanding of the game’s rules as your hopes of winning decline with poor strategy, just like in blackjack. The fact that the player goes first also places you at a disadvantage, as the dealer will never lose before your first move (they can fail to qualify).

As in 3 card poker, most games of 3 card brag will be a fencing match between two high hands. There are more than 22,000 possible combinations in this casino game but only 4 of them are Prial threes, compared to 16,440 high hands. The percentage of getting one of these low-value hands is around 75%, even when using an optimal strategy. 3 card brag is a game of luck, after all.

While 3 card poker and 3 card brag might feel like the same game (in fact, the Indian game Teen Patti is also derived from 3 card brag), they contain enough differences that any interested player is going to have to learn them separately. After all, just reading the hand rankings in 3 card brag can be a jarring experience for fans of most other poker games.

The downside of taking the time out to learn 3 card brag is that it’s a rare game online, currently only available at casinos running Playtech software. This effectively makes 3 card poker the de facto short-form poker game on the internet.

We hope you learned something from our guide to 3 card brag. Continue your poker education by visiting the betting guides section of our website.