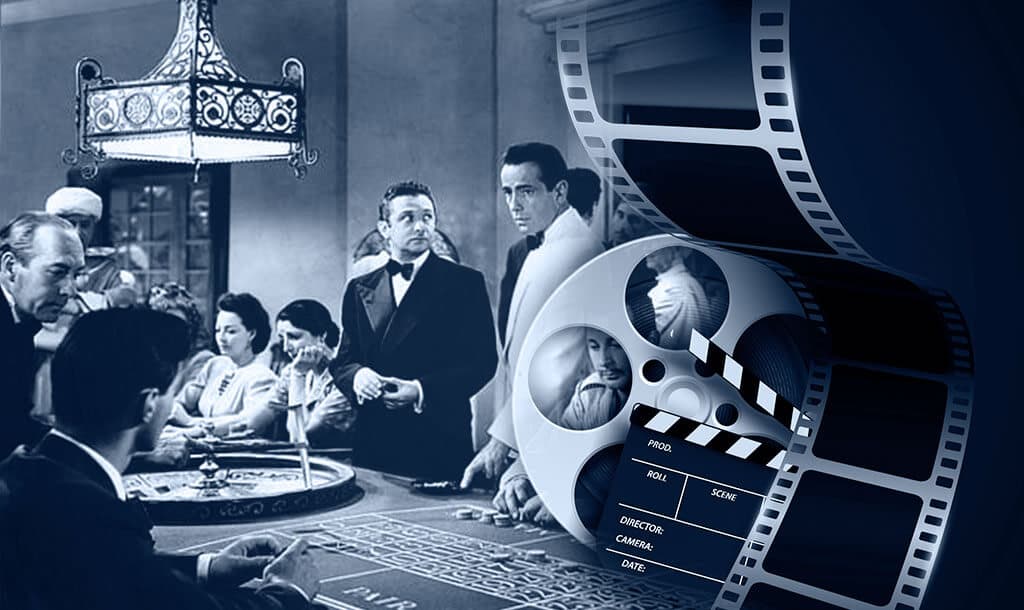 Money, passion, intrigue, and the thrill of the grand gamble. The casino is the perfect setting for a dramatic dénouement, a twist in the tale, or a climactic turn of the card. Fortunes can be made and lost. Relationships tested, tried, and taken to the bank.

In literature, music, and film, the casino has given writers, artists, and directors the perfect setting for a showdown or a shakedown. When big money meets risk, tension mounts and sparks can fly. Join us now, as we roll out the red carpet and celebrate those wonderful widescreen movie moments when the casino took centre stage.

Filmed in 1942, Casablanca is widely considered to be one of the greatest films ever made; ranking #28 in Empire Magazine’s top 100. Humphrey Bogart plays nightclub and casino owner Rick Blaine, alongside Ingrid Bergman as his ex-lover and fugitive Lisa Lund.

Bogart’s Rick is a hard man; running his bar and dealing with the both the underground resistance and Nazis. In one critical scene, he reveals his true – kinder – nature, when he helps two newlywed refugees escape by letting them win on a rigged Roulette table. The couple have to gamble everything to win enough money to buy a visa and escape to America. Rick lets them win with a rollover bet on 22.

No prizes for guessing that this Martin Scorsese classic would feature high in the list of films featuring a casino. Released in 1995, the film tells the thrilling and controversial story of Sam Rothstein, a character based on real-life Las Vegas icon Frank Rosenthal.

Rothstein was hired by the Chicago mob to run the Stardust Casino in Las Vegas. He manages the job beautifully, whilst balancing the demands of the Mob and a high maintenance wife. The film has several iconic casino scenes, including the fascinating insight into the power structure on the casino floor, Ginger hustling punters at the craps table, and cheats at work at the Blackjack table. Las Vegas has never looked better.

The casino scene in Rain Man is arguably the turning point of the film. The story throws brothers Charlie and Raymond Babbitt together, following the death of their father. Raymond is an autistic savant whose quirks and routines frustrate his brother. At a critical juncture in the plot, the brothers have no money left and the situation is looking desperate. In a last bid attempt to save their fortunes, Charlie decides to try his luck in Las Vegas. It’s here that his brother’s savant ability to count extraordinary numbers saves the day.

In an iconic scene, the two suit-wearing brothers descend the elevator into the Emperors Suite, in Caesars Palace, to do some serious damage at the Blackjack table. Raymond saves the day. It’s the key point in the movie where the relationship between the two brothers completely changes. A classic.

In The Sting, we see Paul Newman and Steve McQueen at the top of their game, with some glorious support from the brilliant Robert Shaw. The tale of these affable conmen features an unforgettable scene, set in the carriage of a train, where a big money Poker game is in play.

Newman’s character – Henry Gondorff – pretends to be a drunk, wealthy, businessman, barging into a private poker game. Shaw is gangster Doyle Lonneghan, eager to take down an easy mark. Unfortunately, for Lonnegan, he is outplayed and out cheated by Gondorff. The brilliant acting, the tension between the two characters, and the glorious payoff that pits one grifter against another, all combines to create a truly memorable scene in this multi-Academy Award winning masterpiece.

No shortlist of movies, with casino cameos, could possibly be complete without mention of Bond… James Bond. The tuxedo-clad secret agent is an avid gambler, much like his creator Ian Fleming who famously loved both Baccarat and Bridge.

From the very first Bond film Dr No, where Bond plays Chemin de Fer and utters the immortal phrase ‘Bond.. James Bond’ for the very first time, to the Daniel Craig franchise reboot where the Texas hold’em scene is a master class in high tension film making, Bond has been stacking up the chips.

Few films have had such a vital link with the casino. It’s where Bond seduces the women with his canny technique. It’s where the baddies lurk and make their fruitless assassination attempts.

So, there you have it. Our top five films were the Oscar for best supporting role should have gone to the casino.  We haven’t included The Hangover, Rounders, Indecent Proposal, What Happens in Vegas, and many others. What are your favourites?