Top 10 Casino Movies of All Time 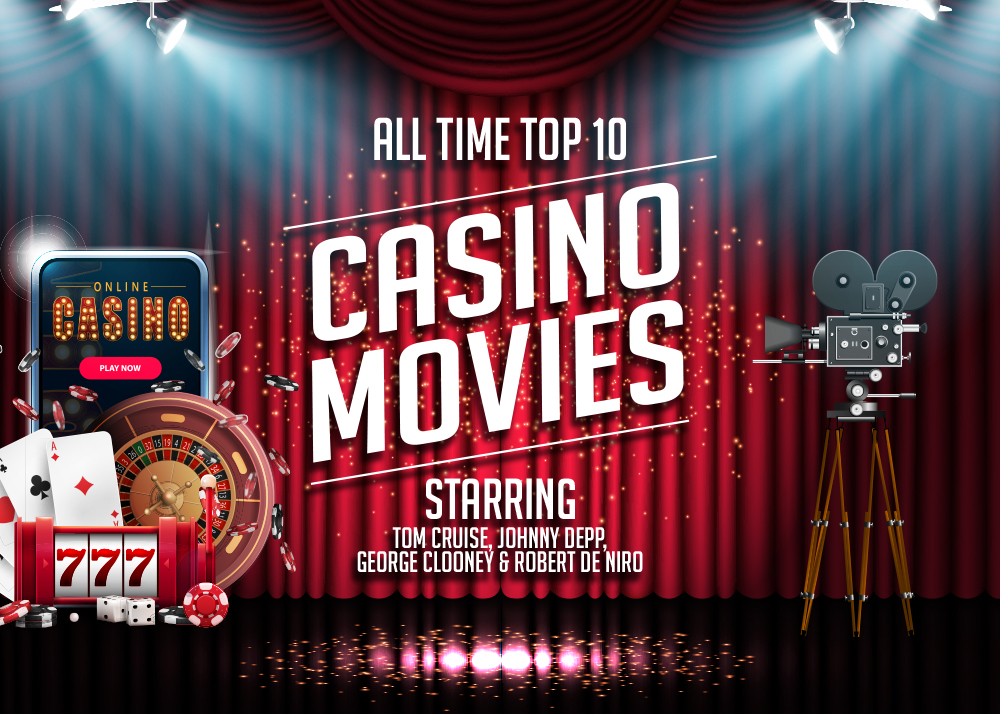 Few environments contain as much potential drama as the casino. Fortunes are made and lost on the turn of a card; cheats prosper and fail; character is tested when the chips are down. It’s a heady mix of money, desire, risk, and reward. Who dares wins – or walks away?

Not surprisingly, it’s been the backdrop for scores of movies over the years. From A-list heavy blockbusters like Ocean’s Eleven and The Sting, to independent features like Croupier and Rounders, cinema and the casino have been productive bedfellows. OK… dim the lights, open the curtains, grab that popcorn. The trailers are over. The main feature is about to begin. Are you sitting comfortably? Cue…. Action!

Barry Levinson’s remarkable film about the Babbitt brothers won five Academy Awards when it was released in 1988, including Best Picture, Best Director, and Best Actor. Dustin Hoffman plays an autistic savant whose incredible ability with numbers leads to – arguably – the most famous Blackjack scene ever committed to film.

The Sting is another multi-Academy Award winning film (seven in total) that features one of the greatest Poker scenes ever filmed; a glorious battle between grifter Henry Gondorrf (Paul Newman) and greedy gangster Doyle Lonnegan (Robert Shaw). May the best cheat win. A classic.

Steve McQueen is at his most watchable in this classic story of a young gambler, Eric ‘The Kid’ Stoner, trying to make his name in the world of Poker. Released in 1965, it’s a cautionary tale about the perils and pitfalls of gambling. Interesting trivia: the likelihood of the two Poker players hitting the cards they do in the film’s final hand are more than 332 billion to 1 against. Artistic licence activated.

21 is based on Ben Mezrich’s 2003 book, Bringing Down The House, about a group of MIT students who card count their way to a small fortune in Las Vegas. The 2008 movie takes a lot of dramatic licence with the truth and got criticized for being ‘mundane’, but audiences still enjoyed this high-octane drama.

Considered by Poker players to be the best film ever made about the game, Rounders tells the rollercoaster tale of law student Mike McDermott (Matt Damon) and his dream to play at the World Series of Poker. Released in 1998, the film had an unremarkable opening but has gone on to earn cult status. I’m all in.

No top ten of casino movies can be complete without at least one James Bond film. Released in 2006, Casino Royale was Daniel Craig’s first appearance as Bond and arguably his best. In the book, a game of baccarat between Bond and Le Chiffre sorts the boys out from the men. In the film, Texas Hold’em is the license to thrill. Hint: don’t bet against Bond.

Ocean’s Eleven is an absolute blast, from start to finish. Combining a stellar cast, a crazy plot, some great one-liners, over-the-top acting, and a Las Vegas backdrop, the film was both a critical and commercial hit. The Bellagio, Mirage, and MGM Grand have never looked better.

#3. Fear and Loathing in Las Vegas

Johnny Depp gives it his all in Terry Gilliam’s take on the classic Hunter S Thompson novel of excess, psychedelic drugs, and a trip to Las Vegas. The film tanked on its release, and polarized critics, in 1998. Since then, it has earned cult status. Las Vegas at its most insane.

The casinos of London take centre stage in Mike Hodges’ compelling and brilliant 1999 film Croupier. The tale of down on his luck writer Jack Manfred (Clive Owen), working as a croupier, is a slick thriller with character and depth. It also helped to launch Owens’ Hollywood career. Don’t miss this one.

Is there a movie more worthy of the top spot in our top ten list? Martin Scorsese’s Casino breathes life into the Las Vegas of the early 1960s/1970s. Sam Rothstein (Robert De Niro) is the man challenged with keeping the mafia happy, the casino running, and the bureaucrats on board. A phenomenal film that goes to straight the beating heart of its eponymous subject.