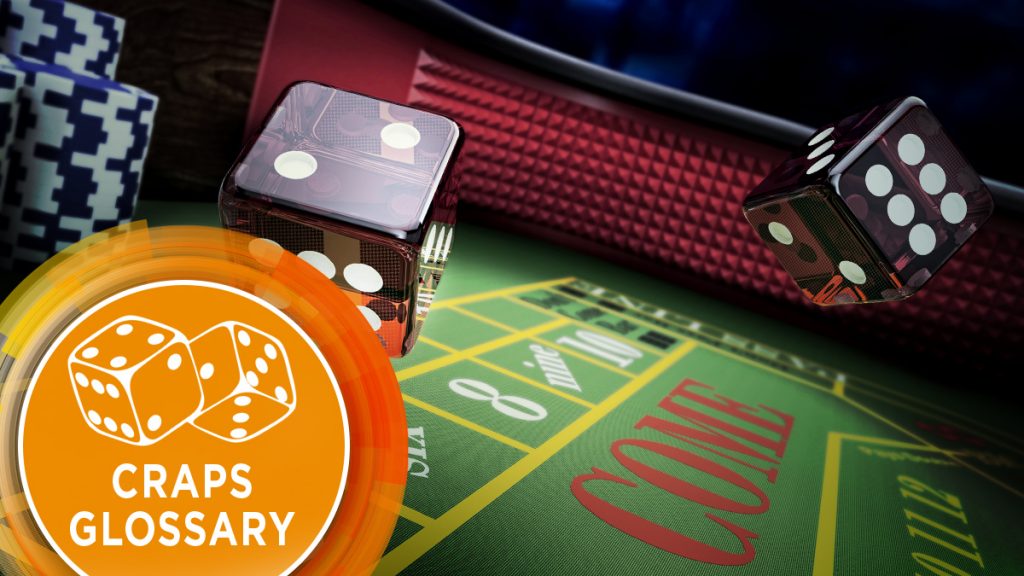 Craps is one of the wildest games at any casino: noisy, chaotic, and super high energy. It can be intimidating for the first-time player, even after you understand the rules of the game, but you can improve your chances of being a sharpshooter with this handy craps glossary courtesy of your favourite online casino. Are you ready to find out what snake eyes means, along with many, many more? Let’s roll.

2-Way – Player bets a one-roll bet for both himself and the dealers.

Ace – A die showing a value of one.

Aces – Betting that the next roll will be the total sum of 2. Also called Snake Eyes.

All The Spots (We Got) – A slang term for a roll of twelve.

Any Seven – A bet that the next roll will total 7.

Arm – A player who is skilled at throwing the dice.

Big Red – Another word for seven. Superstitious players do not use the world seven at the table.

Bones – Another name for dice.

Boxman – Table supervisor seated between the dealers and opposite the stickman.

Boys or The Boys – Slang for the Dealers.

Centre Field – A slang term for a roll of nine.

Cold Table – A table where most of the players are losing.

Cold Dice – When it’s not rolling your way.

Come Bet – A bet made after the point is established. The same as a pass line bet.

Come-out roll – The first roll of the dice to establish a point. ​

Craps Check – Betting on any craps during the come-out roll, therefore hedging your pass line bet.

Don’t Come Bet – A don’t pass bet made after the point is established.

Don’t Pass Bet – A bet that the shooter will not make his point.

Double Odds – An odds bet that is twice the size of the original pass/come bet.

Fever – Slang term for a roll of five.

Front Line – Another name for a pass line bet.

Garden – Slang for the field bet.

Hop Bet – A bet that the next roll will result in one particular combination of the dice, such as: 3-5, 2-

Horn High Bet – A bet made in multiples of 5 with one bet on 3 of the horn numbers, and two bets on the “high” number (number 12).

Hot Dice or Hot Table – When players are winning.

Insurance Bet – A wager made to protect against a losing bet.

Lay-Out – The printed area on the felt where wagers can be placed.

Lay Odds – After a point has been established, an extra odds bet can be made that wins, only if the original ‘don’t pass’ bet wins.

Little Joe – Slang for a pair of twos or Hard 4.

Little Phoebe – Slang term for a roll of five.

Marker – The plastic disk used to mark the point. One side is printed “on” and the other “off”.

Mark the Point – The dealer puts the Puck on the layout to indicate the point number.

Natural – A seven or 11 thrown on the come-out roll for a winning bet.

One Roll Bet – A bet in craps that is won or lost with a single roll. ​

Odds Bet – An extra wager made in addition to the pass line bet.

On – This means that your bets are working or in action.

Pass Line Bet – A wager made on the come-out roll where you bet that the shooter will make the point.

Payoff – The amount received from a winning bet.

Payout – The odds associated with a bet, or the amount received from a winning bet.

Point – The number established by the come-out roll.

Press a Bet – Adding money to an existing bet (typically doubling it).

Proposition Bet – A wager on one of the bets in the centre of the layout.

Puppy Paws – Slang for a roll of ten.

Rail – The area around the top of the craps table where players keep their chips.

Right Better – A player with a bet on the pass line.

Rack – The grooved rail where you keep your chips.

Seven Out – Phrase used when a shooter rolls a seven before making their point thus losing the pass line bet.

Shooter – The player rolling the dice.

Skinny McKinney – Slang for a roll of seven.

Square Pair – A slang term for a hard eight (a pair of fours).

Stickman – The dealer with the stick that runs the table

Up Pops the Devil – Slang term for a roll of seven.

Winner on Dark Side – A slang term for a roll of three.

Working Bets – Bets that remain in play for the next roll.

Wrong Bettor – A player betting against the shooter.

Yo or Yo-leven – The word used for rolling an eleven so as to not confuse it with “seven.”