How to Play Let It Ride Poker 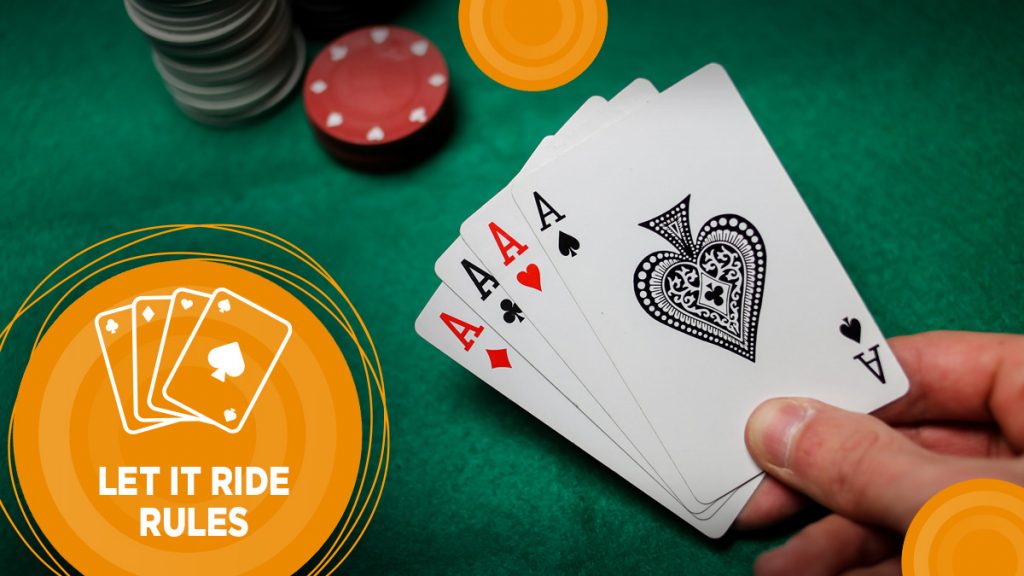 Let It Ride Poker is a table game that was invented in 1993 by John Breeding. Breeding was the founder and CEO of Shuffle Master, an automatic card shuffling device, who devised the game with the objective of increasing sales of the machines.

On the face of it, Let it Ride Poker is particularly suited to beginners who want to become familiar with the various types of winning poker hands but are wary of joining a poker game. It is also popular due to the fact that players can take back some of their initial stakes after the cards have been revealed.

Let it Ride is one of the most popular poker variations, which is due partly to the simple rules of the game (it is based on five-card stud poker). It should be pointed out that Let it Ride Poker is a game of chance and based entirely on luck. The objective of the game is to get the best five-card hand, however, the unique aspect of the game is that you don’t play against any of the other players or the dealer.

To begin with, each player in the game is dealt three cards face down, known as personal cards. You must not reveal your cards to other players until the end of the game, and the dealer receives two cards face down, which serve as communal cards. The five cards are used to create a Let it Ride poker hand for each player.

The game begins with players placing three bets of equal value on the three circles indicated by the dollar sign, also known as the betting circle, the number two and the number one. For example, if your stake is £10, you would bet a total of £30 with £10 on each of the three circles.

The main aspect of this game that distinguishes it from other classic poker variations is that if you are not happy with the cards you have been dealt, perhaps you have a seven, an eight and a 10, for example, you have the option of taking back your first bet. which has been placed in circle number one.

Alternatively, if you are happy with your cards because you have a pair of 10s or better, you can let the bet ride. After each player has made a decision, the first of the two cards of the dealer will be revealed. Again, you have the option to take back your stake in circle number two or to let it ride.

Nonetheless, the sum on the dollar sign circle must remain in play. The next step is for the second of the two dealer cards to be revealed, which means each player has a five-card hand, resulting in a payout or a losing hand.

Some versions of Let it Ride also have the option of placing a side wager on the bonus bet, which is based on the three cards you have been dealt.

There are a number of different payouts in Let it Ride Poker, but the main thing to remember is that you require a hand with a pair of tens or better in order to gain a payout.

The payouts and odds are as follows:

The House Edge of Let it Ride Poker

The house edge of this game is 3.51%, which is high compared with a blackjack house edge of 0.5%. Of course, while there is also the potential for up to a 1000/1 win when playing Let it Ride, this is not the case for blackjack.

Let it Ride is a game of pure chance. Nevertheless, it is important to give yourself the best chance of winning by following a strategy based on the cards you have been dealt at each point in the game, taking into account the house already has an edge of 3.51% based on optimum play.

For example, the bonus bet in Let it Ride offers the opportunity for big payouts, but the house edge on the bonus bet is really too high at 13.77%, so you should really avoid the bonus bet and concentrate on the main part of the game. For more Let It Ride strategy and tips head over to our poker expert’s analysis of the game.

We hope you have enjoyed reading this guide on how to play Let it Ride Poker. It is a quick and simple game, which will give you a gentle introduction to the various poker hands without any pressure.

You should now have a good understanding of the rules of the game, along with the types of bets you can place in Let it Ride as well as the payouts and odds. By following a Let it Ride strategy, you should know when to let it ride or take back part of your stake when decision time arrives. Experts would advise that you should also follow the advice to avoid wagering on bonus bets.

Next: Let It Ride Tips