Pull down your bandana, grab your six-shooter, and prepare for a great train heist – wild west style. With a name almost as long as its playability, Wild Wild West: The Great Train Heist is a high-octane, graphical masterpiece from the star developers at NetEnt (the team behind Starburst).

It is set against a backdrop of an old west train station, with tall cacti and high-speed steam trains. It features a host of symbols plucked from classic westerns, including Guns, Stetsons, and Safes, and it facilitates fast and seamless play from the first spin to the last. 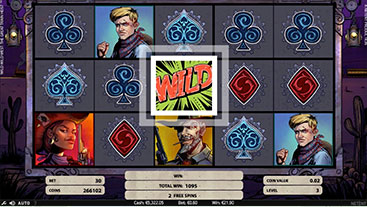 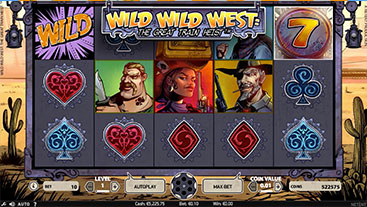 Wild Wild West: The Great Train Heist features several main characters, all of which are represented as high-paying symbols. There are four gunslingers in total, with the Red Shooter symbol offering the biggest payouts.

The game comes loaded with two features, both of which are triggered by the appearance of in-game symbols (both a Bonus and a Scatter).

If you have an account with Casino.com CA then you can play Wild Wild West: The Great Train Heist in Practice Mode. Also known as “Play for Fun”, this lets you play the game without risking any real money. It’s like a “try before you buy” and is a great way to get accustomed to the game mechanics and features.

Once you’re ready to play Wild Wild West: The Great Train Heist for real money, then visit the cashier, make a deposit, and start playing. It’s as simple as that. You can play all of the Casino.com CA games for real money, so once you’ve had your fill of this NetEnt classic then check out our games lobby and see what else we have to offer you.

The highest payout for a single payline is 500x. This can be won with all the Wilds in the Free Spins round and the Red Shooter female character in the base game.

There are two game features to unlock on Wild Wild West: The Great Train Heist. One of these is a “pick and click” and is activated when three of the Golden Safe bonus symbols appear on the reels. Players simply need to select one of the options, click, and then win anywhere from 5x to 50x.

Only one choice can be made during this feature and only one payout is offered. There is another feature though and this one is even better.

The main feature on Wild Wild West: The Great Train Heist is a Free Spins round. This feature is unlocked via the scatter, which takes the form of a “7” and can appear on every reel. These do not need to appear consecutively and the feature will be activated providing there are at least three of them anywhere on the reels.

In this feature there are several different coloured Wilds available, each offering something different:

To tweak the size of your bet on Wild Wild West: The Great Train Heist, simply adjust the “level” which essentially dictates how may “coins” will be wagered, and the “coin value”, which ascribes value to these coins.

Once you’re ready to spin, hit the gun cylinder in the middle of the game and then hope that the reels fall in your favour!

Wild Wild West: The Great Train Heist can be played on mobile devices and looks every bit as impressive on a 6-inch screen as it does on a 20 inch one. The music adds to the immersive experience, taking players back to the days of Spaghetti Westerns when music was an integral part of the storytelling experience.

The graphics have been beautifully rendered and will look fantastic on screens that support high-resolution displays. The layout of Wild Wild West: The Great Train Heist is also suited to mobile play, offering fast and seamless spins throughout.

Westerns are big right now and have featured prominently in some recent hit TV shows, films, and video games. They have a timeless appeal that will ensure games like Wild Wild West: The Great Train Heist continue to draw a crowd.

This game has all the hallmarks of a future slot classic, so sign up to Casino.com CA today and play this game (responsibly, of course) as part of your casino Welcome Package Bonus!