The Pyramid Quest for Immortality slot game takes players on a mega-payline journey through ancient Egypt. Inspired by one of the oldest and greatest civilizations ever, Pyramid Quest for Immortality features 720-win lines and is loaded with all the trappings of ancient Egyptian culture, from sandstone blocks etched with hieroglyphs to jeweled scarabs, golden sculptures, and tall pyramids. 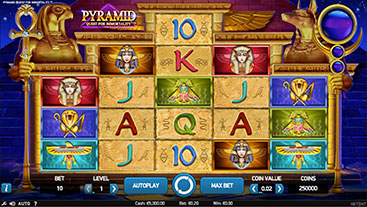 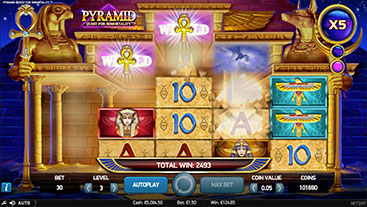 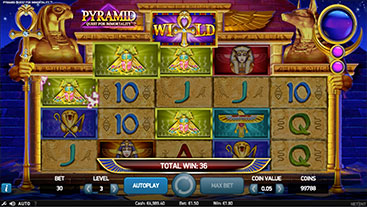 The Pyramid Quest for Immortality slot game features a unique set of reels. Two of the reels have three rows, two have four rows, and the middle reel has five. If you’re paying attention, you’ll notice that the reels resemble a 2D pyramid, which is clearly what NetEnt were going for when they designed this title.

There are 720 paylines spread across these 5 reels. This is the result of a unique payline structure that rewards players for lines of connecting symbols. It doesn’t matter how seemingly random those connections are, as long as they match and are in adjacent rows, the game will payout.

With games like Pyramid Quest for Immortality, which feature unique mechanics, it’s a good idea to play in practice mode until you get used to the features. If you have a Casino.com CA account then you have all you need to play in “fun mode” and give this slot a spin for yourself.

Ready to play Pyramid Quest for Immortality for real money? Just sign up to Casino.com CA, make a deposit, and play!

You can use your casino balance to play a host of other great video slots as well. Just click onto our games room once you have finished with Pyramid Quest for Immortality.

The highest paying symbol on Pyramid Quest for Immortality is the Red Pharaoh, which returns a win of 50x. The sheer bulk of paylines, however, in addition to the Avalanche feature (discussed below) means that the maximum win per spin is much more than this.

One of the standout features on Pyramid Quest for Immortality is the base game structure. The reels are uniquely placed to allow for lots of paylines, all crammed together in a relatively small space.

Pyramid Quest for Immortality also utilizes an Avalanche feature, which other developers have referred to as Rolling Reels or Cascading Reels. This feature removes all winning symbols from a spin and replaces them with new ones. If there is another win, then this process repeats. For every three wins the multiplier increases by 1x and can go as high as 10x.

There is also a wild, which takes the form of a Purple Ankh. This is one of the biggest symbols in the game and also plays a role in Pyramid Quest for Immortality’s Avalanche feature. If the wild appears at the top of the second, third or fourth reels and is part of a winning payline, then it will lock in place for the next Avalanche.

Pyramid Quest for Immortality has many elements, but it still provides a seamless experience and you shouldn’t notice any issues even if playing on older devices. The sound is as crisp as the movement and it looks and sounds great on tablets and smartphones.

You can play this game on both Android and iOS devices and it was actually developed with mobile users in mind, so it looks and plays as well as you would expect.

Pyramid Quest for Immortality has an action-packed base game, utilizing one of the most popular slot mechanics and combining it with great graphics and seamless play. Avalanche will keep players entertained as it combines many of the elements found in free spins and bonus features.

Pyramid Quest for Immortality is a fast, thrilling slot from one of the masters of the genre and you can find many more games like this at Casino.com CA. Sign up and play today, just make sure you take advantage of our Welcome Package Bonus when you do.