Help the Goonies find the hidden treasure in the slot game adaptation of the cult 80’s classic of the same name. Directed by Steven Spielberg, the classic buddy-movie has withstood the test of time and has now made the successful crossover to the online casino.

The reels are sitting on the hidden treasure map, and as you spin the reels, you will have a chance to keep some treasures for yourself.

There are six random modifiers and six bonus features that can be awarded on any spin. For all the exciting details, continue reading this online slot review. 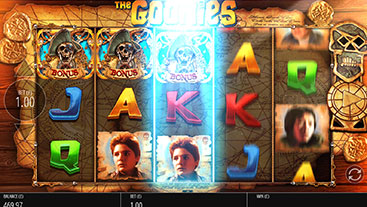 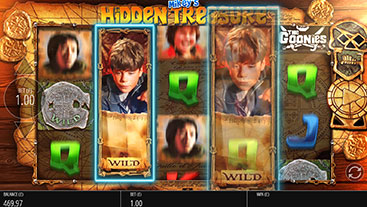 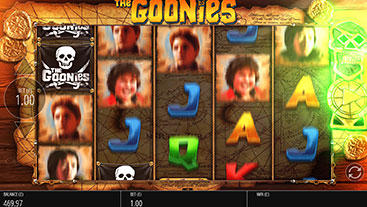 With a nice collection of modifiers and bonuses, this is one game that you’ll want to play for real money. Open your Casino.com CA account today, make a deposit and experience The Goonies like never before.

In addition to a great Welcome Bonus, there are always new bonuses and promotions available to real money players. For the latest offers, make sure to check out the Bonus and Promotions page.

The Goonies is a fixed 20 payline slot game that pays out going from left to right. There is an autoplay feature that allows you to set a win and loss limit and play up to 99 games without having to do anything. To get started, set your bet and click on the spin button and then wait and watch as the reels spin.

The high-value symbols are not characters from the movie (they make their appearances during the bonus features). Rather, they are important items that were in the movie. The high-value symbols are a pirate ship, treasure chest, skeleton, scale with gold on it, and a pirate flag. In addition to being the highest paying symbol, with payouts of up to 500x the line bet, the pirate flag symbol comes Super Stacked and only needs two in a row to create a win. For a complete breakdown of all the payouts, please refer to the chart below:

If you get three scatter symbols on the reels on any single spin, you will trigger the One-Eyed Willy bonus feature.

Before you begin, spin the bonus wheel to see which of the following six features you will receive. After you win the feature, you will have the option to Gamble and continue to another round. If you lose the gamble, you will also forfeit any winnings from the current feature.

The Goonies is available in full-screen mode for both Android and iOS devices. All 12 bonus features are in play, and the maximum and minimum bets remain the same. Blueprint Gaming did a great job making sure that the buttons are large enough that you won’t be clicking on the wrong coin value or number of auto spins by mistake. To access the paytable, help menu, or cashier, click on the Menu button on the bottom left side of the screen.

With 12 bonus features, The Goonies is one of the most exciting slot games to play. You never know when one of the kids will come on the screen and award you with a modifier, and they tend to pay out pretty well. Open an account and start playing for real money today