Beavis and Butt-Head are back on the couch watching TV – but instead of heavy metal on the tube, these two teens are watching a slot game that can pay out real money. While the reels are spinning, you can feel the nostalgia as the two characters grunt, smirk, and make comments based on the outcome of the spin. From time-to-time, they open a bag of nachos or throw some fire on the reels to create additional chances for you to win money.

In total, there are eight random modifiers and six bonus features that can be won. For all the details, continue reading this slot review. 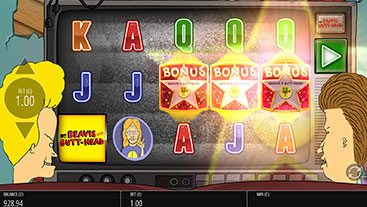 To win real money, you will need to open an account and make a deposit. There are several payment methods for Canadian players to choose from, and once the deposit is complete, you will receive a Welcome Bonus.

Check out the Bonus and Promotions page and see the latest offers available for both new and returning punters.

The biggest payout you can get on a single spin is 500 times your line bet. To win the most money, you will need to make the maximum bet of $500 and get either five wilds or Beavis and Butt-Head logo symbols.

There are 15 different coins that you bet with. The minimum bet is $0.10 a spin, which comes out to $0.005 per line, and the maximum bet is $500, or $25 a line. Understanding the difference between the total bet and the line bet is important because all wins are paid based on the line bet.

There are five high-value symbols in this slot game and four lower value ones. The highest paying symbol is the Beavis and Butt-Head logo, which can payout up to 500x the line bet. This is followed by Beavis and Butt-Head, each with their own symbols that have a maximum value of 300x. The guy's school principal and one of their teachers round up the high-value symbols with 200x max payouts. The lower value symbols are J-A playing cards.

You can see a complete breakdown of the paytable in the chart below:

There are two more modifiers. One can knock symbols off the reel, and the other will randomly change a symbol – in each case a win is guaranteed.

If you get three bonus symbols on a single spin, you will reach the Bonus Stuff Kicks Ass feature. Choose one of the squares to find out which game you will play, and once it’s revealed you will have the option Gamble and play in a better feature.

If you are playing slot games on your mobile device, you should have no issues when you play Beavis and Butt-Head. The game has to be played in landscape mode, which allows for larger buttons and the seamless animations. Blueprint Gaming did a great job developing this game, so it works seamlessly across all platforms.

Even if you've never watched an episode of Beavis and Butt-Head, there are plenty of reasons to play this casino game. Start playing today and collect your Welcome Bonus.