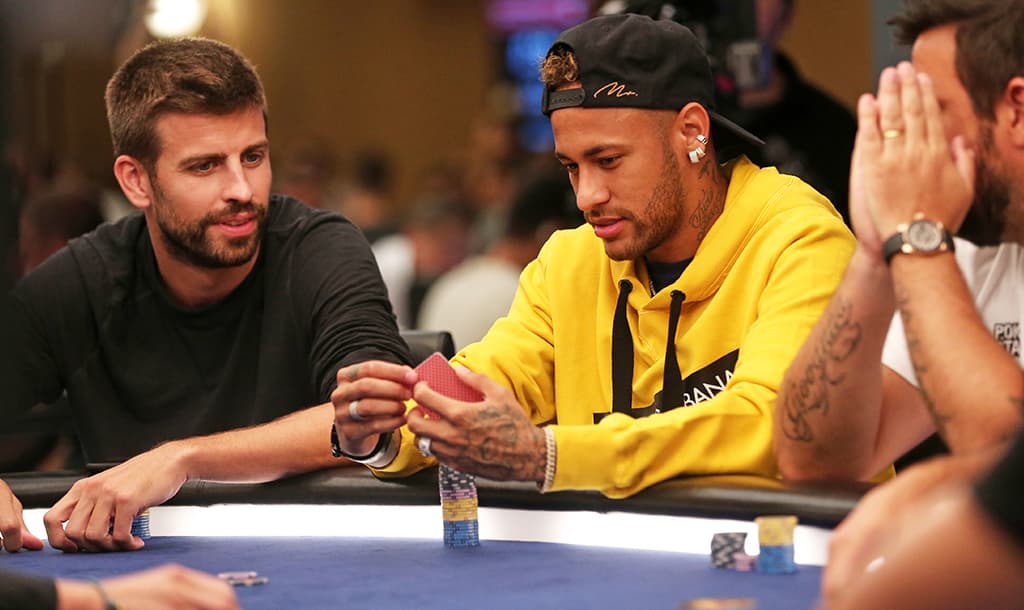 If you can make millions of dollars in a career doing anything, there must be an element of skill involved. If it were all luck, our perception of the world would be in question, working hard to succeed wouldn’t mean anything. Bill Gates, a fluke? Can’t be. The celebrity poker players we’re going to talk about love the game of poker, and they’re all pretty good, so let’s not write them off just yet.

A Tale of Two Sports?

These high-level footballers’ competitive nature has not faded, they used to play on grass, now they play on felt.

One celebrity who considers “poker a sport” is Gerard Pique who says, unlike football, in poker, you can play against the best in the world even if you’re a rookie. He enjoys the ’sport’ and has been involved in the most prestigious poker tournament around, the World Series of Poker (WSOP) main event, since 2013. Learning to play the game from former teammates John Oshea, Darren Fletcher and Wes Brown whilst at Manchester United.

Now at Barcelona FC alongside Lionel Messi, Gerard has won more than €650,000 playing poker and in 2019 he came second at an event in Barcelona winning his biggest ever cash prize, taking home €353,000; his then teammate Arturo Vidal finished 7th in the same tournament. Teddy Sherringham is another ex-Manchester United player who enjoys the classic table game, claiming a respectable $40,000 after a 14th place finishing in the 2009 WSOP.

However, possibly the biggest name in sport to play poker is none other than the 2002 Brazilian World Cup hero, Ronaldo. El Fenómeno, who is signed to PokerStars, is competing in the WSOP main event this month in Las Vegas with career earnings total of $45,760.

Can you keep your cool when the stakes are high if you land pocket aces? Can you hold your nerve betting big on the river when your drawing dead? Can you act?

Well, best friends Matt Damon and Ben Affleck are big poker fans, their day jobs involve pretending to be someone they’re not for which they get paid millions of dollars, so poker should come easy to them. Back in April, the duo raised over $1.75 million for Coronavirus relief by organising an online poker tournament with celebrities and pros all getting involved.

Matt Damon developed his interest in the game during the filming of the movie Rounders; he and his co-star Edward Norton were trained by the legendary Johnny Chan. Unlike Matt, Ben has had a huge win, winning $365,400 for coming 1st at the California State Poker Championship! The runner up in that event was Tobey Maguire who has had success in live and online poker, however is more infamously known for being connected to the hit movie ‘Molly’s Game’ alongside Matt and Ben for playing cash games, with extremely high stakes.

Matt Salsburg is my first pick, a writer and producer involved in hit series such as ‘Weeds’ and ‘Entourage’. At first “it was a hobby”, now with over $2 million in career earnings and a famous win on the World Poker Tour Grand Prix de Paris, taking home $478,415 you could call him a pro. As a writer you create storylines, in poker, you do too, Matt certainly knows how to sell his.

Jeniffer Tilly is a must pick, she is known for her appearances in the Chucky horror movies and Oscar nominee performance in ‘Bullets Over Broadway’ however, on the circuit she can’t be ignored after winning the WSOP Ladies No-Limit Hold’em in 2005. Tilly said she learned by “osmosis” living with a boyfriend and professional poker player Phil Laak, “even in the middle of the night, he wakes up screaming out poker terms.”